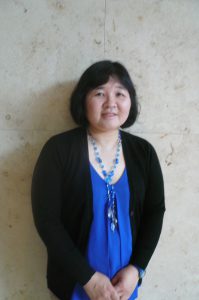 Graduated the Department of Comparative Culture, Faculty of Foreign Languages, Sophia University. Gained a master’s degree in Conference Interpreting from the Middlebury Institute of International Studies at Monterey and a master’s degree in English Language Teaching from Columbia University. After working as a foreign exchange dealer, became a freelance conference interpreter and translator in 1993. Proficient in fields from sports to international conferences.

From 2002, teaching an interpretation course and an English course that applies interpreters’ training methods. Has published articles such as “A Japan-USA Comparison of Conference Interpreter Training”, in the feature “Education and Dissemination of Your Own Language as a Foreign Language”, Nihongogaku, December 1995, Meiji Shoin and “Effectiveness of Pair Work in the Classroom as Practice for Consecutive Interpreting”, Journal of the Japan Association for Interpreting and Translation Studies Tsuyaku Kenkyu, No.2. Writer for the O-LEX Japanese-English Dictionary (Obunsha, 2008) and editorial supervisor for the English translation of “Make an Overall Summary of Just the Important Parts, Current Affairs Terminology” (Nagaoka Shoten)

What Skills are Required to be a Freelance Conference Interpreter?

What skills are required to be a freelance conference interpreter? Naturally, language ability and interpreting skills are needed, but what exactly are these skills, and how can you acquire them? How should you study to be able to interpret in a wide range of fields, not in just one industry? If you become a professional interpreter, how could you go about maintaining and strengthening your skill level?

While the skills required for a simultaneous interpreter at the gold-medalist press conference at the Nagano Olympics, the official interpreter for the Australian Grand Sumo Tournaments, and ringside interpreter for a mixed martial arts tournament have common elements, there are also differences. I will offer advice to everyone who is aiming to be a freelance interpreter from the standpoint of one involved in interpreter training and English education that will enable interpretation at all kinds of international conferences as well as economic and legal occasions such as President Obama’s State of the Nation speech, the Toyako Summit, the UNESCO Intangible Cultural Heritage Conference and the launch of the space shuttle.