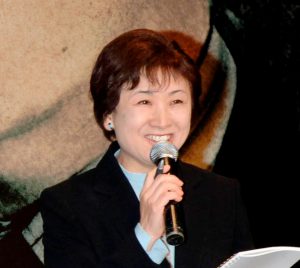 Translator and interpreter born in Tokyo. Lived in Sydney, Australia, from the second to the eighth grades. Graduated from the Language Education program (Intercultural Communication) of the Faculty of Liberal Arts at International Christian University. After working for an advertising agency, an event company and others, became a freelance interpreter/translator. Starting with John Patrick Shanley’s Welcome to the Moon, later turned to drama translation. In 2007, received the 14th Yuasa Yoshiko Award for the translation of two plays. Worked on English subtitles for overseas performances of Japanese plays including Inoue Hisashi’s Yabuhara Kengyo, Minakami Tsutomu’s Hanare Koze Orin, and Yamada Taiichi’s Nihon no Omokage.

In interpretation work, has served as interpreter for Hollywood stars and directors when visiting Japan on movie promotions. Has also worked as interpreter for the Tokyo International Film Festival for over 20 years. Has interpreted for PM Koizumi, PM Aso, PM Hatoyama, PM Noda and PM Abe as well as film directors, producers and actors at opening ceremonies, award ceremonies, press conferences and so on. From 2013, is also serving as a visiting professor at the Faculty of Foreign Studies at Reitaku University.

What Kind of Work is Interpreting in the Entertainment Business?

I was originally a big fan of drama and movies, but since having started to work as an entertainment business interpreter after I happened to receive an introduction by a university senior I have continued to run as if in a dream for over 30 years. Interpreting in this business field, there are always problems occurring on a daily basis, such as the script for a greetings speech not turning up or last-minute changes to the program just before going up onto the stage. In this work, “unforeseen happenings” occur frequently during speeches and based on my experiences I would like to talk to you about to deal with various kinds of happenings.